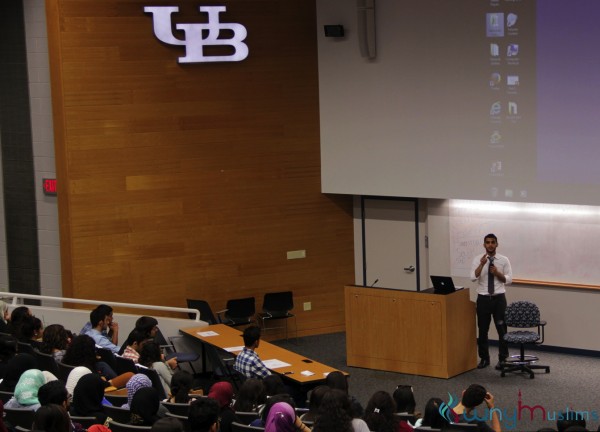 Mohammed Zeyara is somewhat of an internet celebrity. However, what sets him apart from many other Youtubers is his ability to layer his comedy with messages that are also meaningful and thought-provoking. His sincerity has earned him a very wide fanbase, so when he visited University at Buffalo on the evening of September 5th to talk about his experiences living in Gaza, it was no surprise that the lecture hall was packed with audience members both young and old.

In his talk, which was titled “A Tragedy in Ramadan: How Humanity Failed the People of Palestine,” Zeyara recounted harrowing tales of border crossings into Egypt and described the many things he had heard

were smuggled through the underground tunnels between the two countries. According to him, KFC isn’t the strangest thing that crosses through those tunnels – cars and “even brides dressed up in full bridal clothing” are commonplace as well.

However, his most poignant memory was perhaps that of  how he would often run away from bombs with his cousins and friends and then laugh about it. The idea that the bombardment of Gaza is consistent to the point that it is normalized in the minds of Palestinian children was truly saddening. This emotion was exacerbated when Zeyara shared that he had lost many of those same friends and a cousin in airstrikes over the years with no media coverage whatsoever.

Still, “we are Gazan, our hearts aren’t made to rest, they are made to resist,” he declared.

Admitting that his highly personal narrative was akin to a “therapy session,” Zeyara then urged everyone in the audience to empower themselves and to “stop settling for the easy way out.”

“We need your strong words,” he said. “You don’t need to be a hero to influence…you don’t need to wait for a loved one to burn to death to come here and grab a mic. All that you need is determination and sincerity.”

He reminded the audience that it was not just Palestine that needed their help, but Syria, Iraq, Afghanistan, and even the United States and Canada.

“If you see something that needs changing, change it,” he said. “But don’t do nothing, because laziness is killing us.”

After his talk, Zeyara took some time to answer questions from the audience, and then spent almost an hour posing for photos with his fans.  His family, who watched from the front row, proudly looked on.

Thanks to University at Buffalo’s Muslim Student Association, Organization of Arab Students and Students for Justice in Palestine for organizing this event. To see more photos from it, click HERE.

Our exclusive interview with Mohammed Zeyara will be uploaded soon.